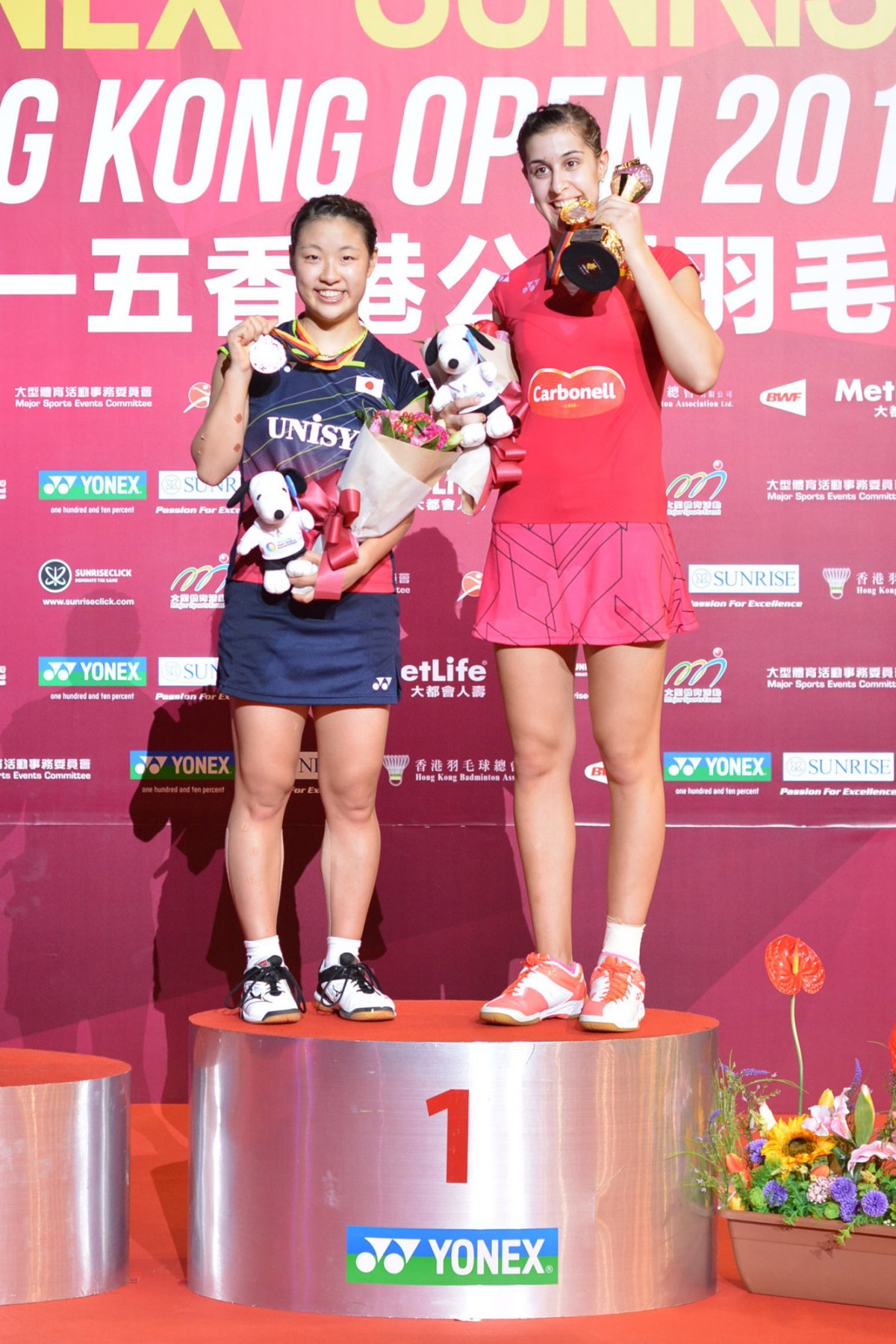 Carolina Marin took the Women Singles’ title of YONEX-SUNRISE Hong Kong Open Badminton Championships 2015 with a thrilling 3 games battle over Japanese Nozomi Okuhara in the witness of over 5000 fans at the Hong Kong Coliseum.

The world No.1 almost lost her title to the Japanese world No.9 who came back from 14:20 in the third game. Carolina finally sealed the deal with 22:20 and won her first Hong Kong Open. In the first two games, Carolina won 21:17 and Nozomi snatch the second one by 21:18.

Carolina Marin said, ‘Nozomi played very well and has a great come back. So all I did was to remind myself I can win the match and try to make fewer mistakes.’ After winning the 5th Superseries title, Carolina said her next goal is the Dubai Open. She said, ‘Olympics is too far away. I will only focus on Dubai Open now. I want to get the title there.’

Carolina is the only European female player can beat the badminton giant China. She defeated Wang Yihan of China in the semi-finals yesterday. Asking about who is the biggest opponent in the Olympics, She said, ‘Myself. I believe I can win the Olympics.

In Men’s Singles Final, 33 year old Malaysian player Lee Chong Wei won his fourth title in Hong Kong Open by beating Tien Houwei of China in 21:15, 21:16. Lee Chong Wei said, ‘I will come back next year if I am still in a good shape after the Olympics. Hong Kong is always my favorite place and I don’t want to disappoint my fans here.’

The Malaysian player said the final match was tough and Tien Houwei played very well in defense. In the past 5 months, it was very tough to him too. Lee said, ‘My world ranking has advanced from N0.180 to No.6 since June. I am very tired after this long journey.’ World Ranking to him is not important anymore as he had been World No.1 for 6 years. His next target will be the Rio Games. ‘Everybody knows I will get the Olympics ticket. I think the most important thing for me is to avoid injury before it. I will not think about the gold medal. I don’t want pressure.’ The three times Olympian said. ‘I am a father of two kids. I didn’t spend much time with them. So the Rio Games will be my last one. I will decide about retirement after it.’ For his competitors in Rio, he said, ‘Everyone can be. There are a lot of young players rising in teams like Denmark, Japan and India. My opponents are not just Lin Dan and Chen Long anymore.’